While most cottagers are familiar with the invasive Eurasian watermilfoil (Myriophyllum spicatum) in Chandos Lake, there is a new potentially worse invasive species at our doorstep. That new invader is starry stonewort (Nitellopsis obtusa). A type of macro alga, it is not a true plant by classification. However, it behaves just like a plant. Starry stonewort is characterized by translucent green leaves that grow in whorls off branching stems. It gets its name from the small, white, star shaped bublis it produces. Accidentally introduced to North America from Eurasia on the ballast water of ships. It was first discovered in the St. Lawrence River in 1978 and has quickly spread inland. It is a significant ecological threat to Ontario lakes with established populations in Lake Simcoe, Lake Scugog and now the Kawartha Lakes Region.

Starry stonewort is an unlike many aquatic plants we have. It is highly calcium dependent, requiring high levels of calcium to grow. If touched, you can feel the calcium granules on the leaves. Starry stonewort has no roots. It attaches to the lakebed with clear filaments and grows suspended in the water column. It can grow in water depths of 0.5 to 10m, with individual mats being 3m thick. Large swaths of starry stonewort create stagnant conditions underneath which there is little oxygen or water flow. Starry stonewort mats are unsuitable habitat for fish and other animals to live. It also competes directly with native aquatic plants and lowers biodiversity. Human activities are impact has starry stonewort’s growth habit chokes out open water areas, limiting boating, swimming, and fishing. 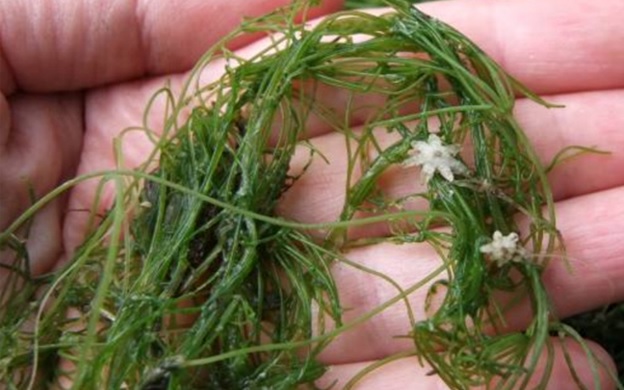 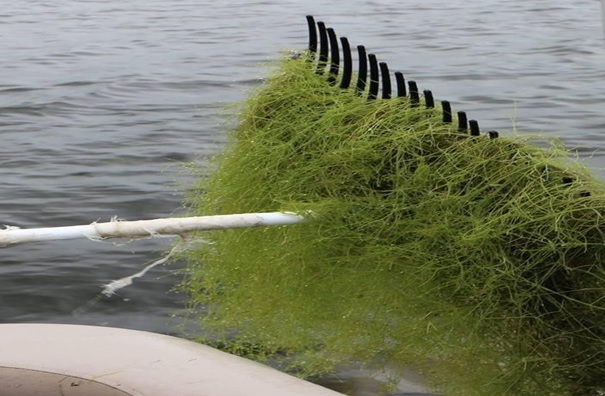 Not unlike Eurasian watermilfoil, starry stonewort spreads through fragmentation. All starry stonewort plants in North America are male. It can only reproduce through clones as fragments and the dispersal of its bublis. Human activity mainly through the movement of boats, is the principal method of starry stonewort spread. As such, it is crucial to clean, drain and dry boats and other equipment before moving to different bodies of water.

Chandos Lake is very vulnerable to a starry stonewort invasion. The alga is found in nearby lakes, like Big Cedar and Stoney Lake, among other lakes of the Trent Severn Way. A few plant fragments could easily get transferred to the lake on a boat prop. Introducing a brand-new invasive species for us to contend with if Eurasian milfoil was not enough.  For more information on starry stonewort please visit the Lake Simcoe Region Conservation Authority website or the FOCA Primer. If you suspect you seen starry stonewort or any other invasive species, you can report it on the invading species hotline ,1-800-563-7711 or EDDMapS Ontario data base.