Observing the awakening of the lake every spring is always a much-anticipated pastime.

The melting of ice and snow under a warm bright sun; the ominous sounds of the ice moving and breaking up; the force and fury of rushing waters; and finally seeing the clear expanse of an ice-free lake, all signals for the start of spring.

This year the ice went out relatively early on April 11, 2020.
One might not necessarily think it, but over the 4 weeks prior, the water level of a largely frozen Chandos rose by about 9 inches. This is mainly due to melt runoff. (rather than due to the melting of lake ice, as according to Archimede’s principle, if one puts an ice cube in a glass of water, the water level remains unchanged as the ice cube melts) 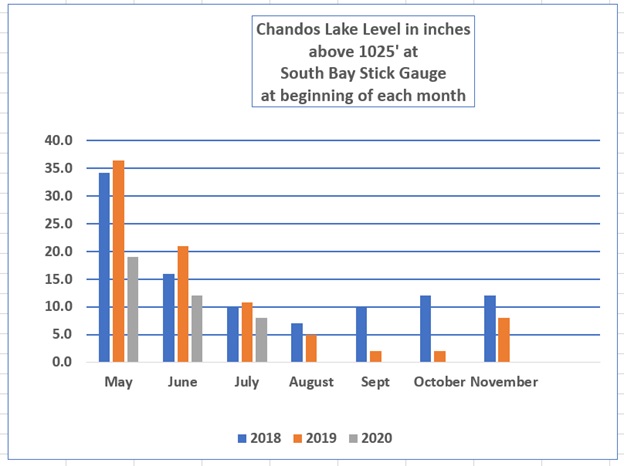 When the ice goes out early, it usually coincides with a more gradual spring melt rate (shorter days, cooler nights) thereby providing more time for the snowpack in the watershed to ‎find its way to Lake Ontario. The more gradual the spring melt the less likely there will be a flood event. When the ice goes out late, as it did in 2018 and 19, coinciding with the onset of longer and warmer days, the more likely there will be a spring flood event, as so much melting occurs so quickly.

Waters from Chandos flow out via Flat Creek to the Crowe River where they join the waters coming from Paudash Lake‎ (where the Crowe originates). From there the Crowe flows south and joins the Trent River just north of Campbellford.

There is a dam at the outlet of Paudash Lake. The Crowe River Conservation Authority operate this dam‎ both to control flooding down the Crowe as well as to regulate the summer lake level of Paudash.

Some springs the operation of the dam and the rate and volume of snowpack melt result in levels on the Crowe being higher than the level of Chandos. ‎This results in the reverse flow of Flat Creek, with water flowing from the Crowe into Chandos, thereby contributing to even higher levels on Chandos. However, during this year’s spring freshet the flow at the culverts was measured frequently and no reverse flow was detected.

On a final note, the summer levels of Chandos have been trending upward over the last 20 years or so, by about 2 feet. Perhaps this is due in part to the gradual silting up of the culverts? However, keep in mind that lake levels are determined by the complex interaction of many variables. Very intriguing is the fact that 2019 had both the highest and lowest levels seen in many a year. We are told that with climate change to expect such extremes. Is this what we are beginning to witness here?